Dorothy Robinson is a statistician and has fought the Australian bicycle helmet laws for a long time. In 1996, she had an article about bicycle helmets published in the peer-reviewed journal Accident Analysis & Prevention. She showed that when helmet-wearing dramatically increased in conjunction with helmet laws, the percentage of head injuries among injured cyclists did not fall. Instead it trends slowly downward at the same pace as head injuries among motorists and pedestrians. She had another similar article published in the British Medical Journal ten years later. 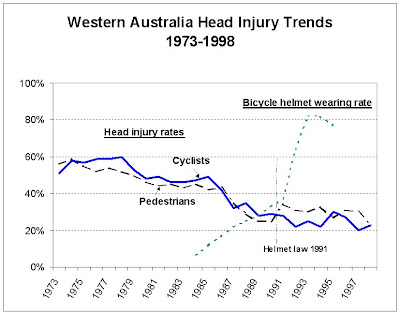 This is apparent even in a one-hour radio documentary from ABC. They go into the most esoteric arguments about diffuse axonal injuries, but say nothing about Ms Robinson's simple and irrefutable before-and-after findings.

No clear evidence from countries that have enforced the wearing of helmets - British Medical Journal
In contrast to the fall in all road injuries in South Australia coinciding with helmet legislation, percentages of cyclists with concussion and other head or face injuries show generally declining trends, especially for concussion, but no clear response when helmet wearing increased substantially.