Car Traffic is a Bigger Threat Than Russia 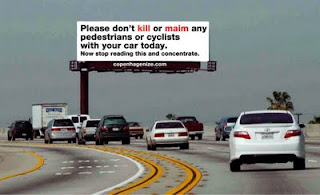 Last year, 30 000 people died in car crashes in the United States. In fact, from 1994 to 2012, 761 000 people have died in traffic, according to the National Highway Traffic Safety Administration. For comparison, 58 000 American soldiers died in the Vietnam war, which lasted ten years.

But top brass has their attention elsewhere. The big problem for American security is Russia, they say. According to the man slated to be President Barack Obama's top military adviser, "Russia presents the greatest threat to our national security." That's a quote of General Joseph Dunford before the Senate Armed Services committee during his confirmation hearing to be the next Chairman of the Joint Chiefs of Staff.

Look. If anyone needs a color revolution, it's the traffic authorities. Those old highway huggers have been in power for too long. It's time for change.