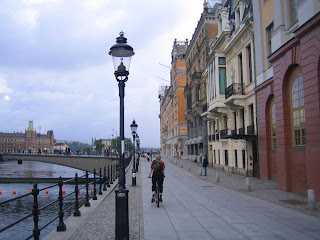 How to Get More Bicyclists on the Road. Scientific American
In the U.S., men’s cycling trips surpass women’s by at least 2:1. This ratio stands in marked contrast to cycling in European countries, where urban biking is a way of life and draws about as many women as men—sometimes more. In the Netherlands, where 27 percent of all trips are made by bike, 55 percent of all riders are women.

A columnist in the Swedish newspaper Aftonbladet suggests bike advocates are just mamils with ridiculous demands, like being able to cycle side by side. For some reason Google won't give me a link with a translated version. So I pasted the text into their form. Here is the result with some small corrections. Have fun!

It's kind of funny that Swedish middle-class men and Saudi women have one thing in common: They see the bicycle as symbol of freedom.

This week came news that Saudi Arabia's religious police will allow women to ride in Riyadh parks as long as they are dressed in full Muslim abaya and only pedalling around for fun. And an overseeing man is required, if not on the rear rack, then at least in the vicinity.

Meanwhile, in another part of the world, memiler - middle-aged men in lycra - bring out their Italian hardtail-weapons and embark on still gritty Swedish springtime roads.

Bike lobby has gained ground in Sweden in recent years.

In Gothenburg, the traffic office recently to introduce a controversial proposal following pressure from the pedal craze: the right to go against one-way streets, such as on Andra Långgatan.

It is just one of many strange requirements pushed by bicycle advocates.

If it were up to them, there would be legislative changes and new regulations to prohibit mopeds, allowing cycling side by side, have run a red light, skip stops and raise cycle speed limit.

Anyone who got away with sheer terror after being overtaken by a roaring memil, know that that the maximum speed is only formal.

It's about democracy and equality, says drop handlebar friends, who want to transform the country into Cycle Nation Sweden. The term "traffic power structure" [play on sex power structure] is used by those who think that our society is controlled by white men in the car.

That's why I wonder if it would be best that we women leave the bike at home?

Nothing has given me such a sense of freedom and power that when I took driver's license last year. By car, you can not just go where you want, regardless of others. It gives one the opportunity to live outside the big cities and look for jobs that you would not have a chance to get otherwise.

Without a drivers' license, you more easily become isolated and unfree, as Rasa in the movie "Eat sleep die," she who has neither means nor the opportunity to learn to drive herself. That less educated women today often lack a license is a far greater problem for society than racing cyclists should not violate traffic rules they dislike.

Sure the bike is more environmentally friendly, but that doesn't take you far. Ask the Saudi women.